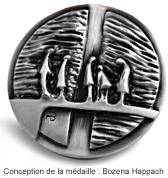 Can you think of a person whose actions have helped Québec's justice system to progress in a way that benefits the whole of society? Or whose initiative has greatly increased access to justice for all citizens?

To ensure that these actions gain the recognition they deserve, you can nominate the person involved for Québec's Prix de la Justice award.

Any person, from any background, who is working or has worked to promote an open, impartial, fair and effective justice system for all citizens, is eligible for the award.

This prestigious award is presented by the Minister of Justice and Attorney General of Québec at a public ceremony that takes place at the Parliament Building, the home of the National Assembly.

Since the Prix de la Justice award was created on June 4, 1990, it has been presented to 27 leading figures in Québec, 12 women and 15 men, to mark their outstanding contributions to the justice system.