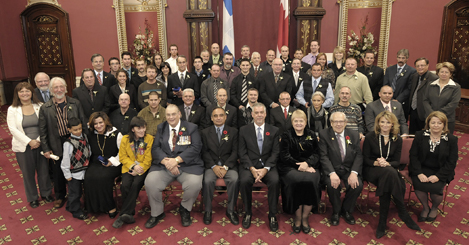 On November 3, 2008, the Government of Québec paid public tribute to 17 persons in recognition of their acts of good citizenship in 2005. The Tribute to Good Citizenship ceremony was held in the Legislative Council Chamber of the main Parliament Building, presided over by the Minister of Justice, M. Jacques P. Dupuis, who awarded 9 medals and 8 honourable citations.

The recipients were also given a lapel pin, which is a miniature replica of the medal.

The acts of good citizenship highlighted at the 23th Tribute to Good Citizenship ceremony were divided into categories.

The medal for good citizenship, accompanied by a gold lapel pin, may be awarded to a person who has accomplished an act of good citizenship under dangerous circumstances. Made of bronze and engraved with the recipient’s name, the two faces on the medal symbolize both aspects of the theme based on risking one's life to save the life of another.

In the "drowning risks" category, the Government of Québec awarded a medal for good citizenship to:

On the evening of August 6, 2005, Éric Girard and Marilou Rodier left for a water scooter excursion on Lac Saint-Jean. When they were some distance from the shore, their engine stalled and could not be re-started. Mr. Girard tried various ways to get the watercraft back to shore, but without success. Since they had no emergency flares, Mr. Girard and Ms. Rodier settled down to spend the night in the open.

Before dawn, the wind picked up and the water scooter was overturned by six-foot waves. The two survivors, wearing lifejackets, began to swim toward a glimmer of light in the distance. When Ms. Rodier lost consciousness, Éric Girard continued to drag her through the water on a four-hour swim. In the early morning, forest workers heard whistling and immediately ran to rescue the two young people. The whole event lasted around twelve hours—and Ms. Rodier barely survived.

In the "accidents" category, the Government of Québec awarded a medal for good citizenship to:

On May 27, 2005, on route 117 Sud, a tractor-trailer rolled over several times and then smashed through a parapet, ending up suspended in mid-air. Two men jumped out of the following car to help.

With a fire raging in the engine compartment and cab, the two rescuers attempted to get the driver out but were driven back by surging flames. Another three men arrived on the scene, and in turn attempted to rescue the driver, in vain. The rescuers noticed that one of the driver’s legs was trapped, and in a final effort, they managed to drag him from the cab and away from the wreck a few seconds before it exploded.

In the "fires" category, the Government of Québec awarded a medal for good citizenship to:

During the night of January 14, 2005, two power line workers, Jean-Paul Pepin and Pierre Vermette, answered an emergency call to repair a fallen hydro pole at Pointe-du-Lac. They had barely arrived on the scene when a huge explosion demolished the front of a building housing a bakery, with apartments above.

Despite a raging fire, Mr. Pepin rushed up to the second floor, where he helped a seriously burned woman to flee the building. He went back into the inferno twice, using stairs that were about to collapse, to save two other people. He then helped the victims to safety. Mr. Vermette assisted a woman whose clothes were on fire, and handed her over to the ambulance technicians before helping fire-fighters organize an evacuation. For several hours, battling fire and smoke, Jean-Paul Pepin and Pierre Vermette worked desperately with fire-fighters to secure the building.

On January 16, 2005, Danny Portelance and his spouse noticed smoke coming from the air vents of their apartment in Saint-Nicolas. They lived in the basement of a house belonging to Daniel Marchand, a corpulent and disabled man who used a wheelchair to move around. Mr. Marchand was trying to haul himself upstairs to rescue his dog. While Mr. Portelance’s spouse called the fire service, Mr. Portelance tried to persuade Mr. Marchard to come back down, but the thick smoke forced him back.

Placing a wet sweater over his face, Danny Portelance made three attempts to climb the stairs in suffocating heat before finally reaching the top. There, he found Mr. Marchand, conscious but confused, and carried him back down to his apartment just as the fire-fighters arrived.

In the "other circumstances" category, the Government of Québec awarded a medal for good citizenship to:

On the evening of July 14, 2005, Patrick Marchand was cycling in Vanier. As he came close to the rail tracks, he heard a whistle, and saw a woman curled up on the tracks beside her electric wheelchair. As the train approached, Mr. Marchand raced to remove Céline Chabot from danger. He had taken only a few steps with her when the train hit the wheelchair and sent it flying over a distance of several metres. Mr. Marchand carried Ms. Chabot, shaken but unhurt, to safety.

Mr. Marchand recovered Ms. Chabot’s personal effects from the wreckage, and then waited with her until help arrived. He only left the scene after obtaining reassurance about Ms. Chabot’s condition. She owes her life to his quick response.

Honourable citations for good citizenship, accompanied by a silver lapel pin, may be awarded to an individual who has performed an act of courage or dedication under difficult circumstances. The honourable citation is a parchment certificate bearing the recipient’s name.

In the "drowning risks" category, the Government of Québec awarded an honourable citation for good citizenship to:

On September 24, 2005, Jacquelin Boivin and his daughter Stéphanie were riding an ATV in a hunting zone in the Saguenay-Lac-Saint-Jean region. They were followed by Carolle Lavoie on a second ATV, who hit a pipe across the trail. She was thrown into a bog, with her quad bike on top of her.

Mr. Boivin sent Stéphanie to seek help and jumped into the cold, murky water. He only managed to locate Ms. Lavoie when he saw her hand sticking up above the surface. He tried to drag her out, but she was stuck beneath her quad bike. Mr. Boivin used all his strength to lift and flip the ATV, and managed to free Ms. Lavoie, who was hurt but conscious. They crawled out of the water soaked and exhausted. When Stéphanie returned with rescuers, Jacquelin Boivin took the time to remove the ATV from the marsh to prevent a fuel spill.

On January 28, 2005, at around 4 a.m., Louis-Jean Boucher and his spouse were awakened by cries for help. A man had fallen into the glacial waters of rivière des Prairies just behind their house.

Mr. Boucher came out half dressed, carrying a rope. He went out onto the ice, at the risk of his life, getting closer to the victim and calling out encouragement. After several attempts, the victim was able to grab the rope and wrap it around his body. With the help of his spouse, Mr. Boucher hauled the man from the water and took him to his balcony, where he plunged him in his hot tub to raise his body temperature until rescue arrived.

Thanks to his clear thinking, quick response and skill, Louis-Jean Boucher saved the life of a man in distress.

On December 31, 2005, Dany Lévesque was riding his ATV across the frozen surface of lac Témiscouata, accompanied by his son and two friends. Close by, Romuald Lord was struggling in the icy water.

The group heard his cries for help. Mr. Lévesque, tied to a rope, walked and then crawled a distance of 300 feet over the ice toward the victim. There, he threw the rope, but Mr. Lord was unable to catch it. Taking an even greater risk, Mr. Lévesque moved further forward and looped the rope under the victim’s arms. With difficulty, his companions were able to haul the man out of the water and back to shore. The group took refuge in a cottage, where Mr. Lord was treated until the ambulance arrived.

Without the help of Mr. Lévesque, he would not have lived to see the New Year.

On July 29, 2005, Geneviève Mineau-Proulx was picnicking with her parents on a beach at Percé. The location was isolated, with only another group of four people in sight.

She swam back to shore, towing Ms. Dumont all the way. The victim’s father and brother helped Geneviève Mineau-Proulx place the victim under a parasol. Luckily, the event had no consequences.

On March 30, 2005, in Joliette, Mario Poirier and a cousin learned on the radio that someone was trying to jump off the pont Des Dalles into the rivière L’Assomption. The two young men rushed to the scene, just in time to see Gaétan Majeau hit the water.

Two police officers arrived. The victim resurfaced, and Mr. Poirier jumped down to the beach and tried to persuade Mr. Majeau not to go back under, but in vain. The victim dived again, ignoring the lifebuoy thrown by a police officer. Several times, he sank and resurfaced. Mr. Poirier tried to grab him, but was not successful. Other tactics also failed, and the victim was swept away by the current. His body was found three weeks later, close to Mario Poirier’s home.

In the "accidents" category, the Government of Québec awarded an honourable citation for good citizenship to:

On May 6, 20055, André Lussier and his son Daniel were driving in Boucherville when they saw a car coming toward them—in their lane. Daniel tried to avoid a collision, but was unsuccessful, hitting the car head on. His car rolled over, hit a lamppost and came to a stop in front of the house of Raynald St-Onge. The occupants of the other car fled the scene.

Mr. St-Onge, who was working outside, heard the impact and, seeing smoke coming from the Lussier car, ran to help while dialling 911. The fire became more intense in the front of the car, and after asking a neighbour to fetch an extinguisher, Mr. St-Onge grabbed André Lussier by the arms and managed to pull him from the car, even though his leg was trapped. Daniel was able to get out, but his car was a wreck.

The Lussier father and son and Mr. St-Onge all have medical sequels from the incident.

In the "fires" category, the Government of Québec awarded an honourable citation for good citizenship to:

During the night of July 13, 2005, in Duhamel-Ouest, Daniel Parent, who was visiting his father, heard groaning and leapt out of bed. He saw flames coming from under his father’s bedroom door, and beating it down, fought through thick smoke to where his father was lying on the floor, conscious but in pain. The room was engulfed in flames, the heat was intense and the victim was seriously burned. Mr. Parent grabbed his father beneath the arms and dragged him out of the house, returning to find his phone and call for help. He had barely got out of the house when the roof collapsed.

Lorrain Parent died the following day. Daniel has burns to the face, but suffers mainly from psychological trauma.

In the "other circumstances" category, the Government of Québec awarded an honourable citation for good citizenship to:

On August 15, 2005, at the airport in Mascouche, pilot Sébastien Benoit took a young man on board for a short flight. As the Cessna gained altitude, Mr. Benoit noticed that his passenger was trying to open the plane door and jump out.

Mr. Benoit seized the young man’s arm and attempted to reason with him. While looking for a place to land, he went into a steep dive to make his passenger’s attempts to leave the plane as difficult as possible. Trying to control a passenger with a death wish while flying a plane is both difficult and dangerous, but Sébastien Benoit successfully landed his plane at Mascouche airport. By keeping calm, he saved two lives.